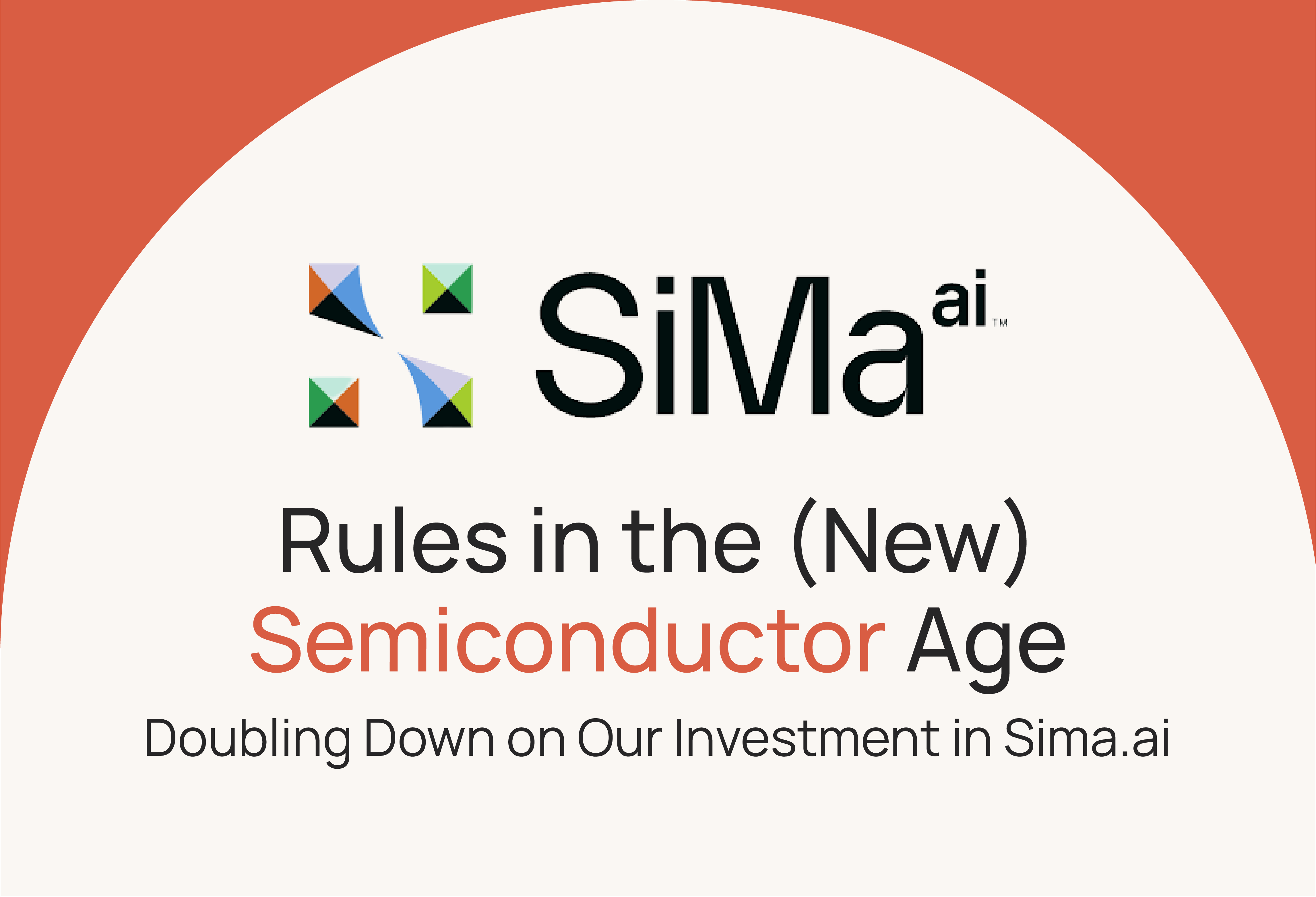 Amplify News
10.26.2022
Rules in the (New) Semiconductor Age and Doubling Down on Our Investment in Sima.ai

We congratulate Sima.ai on today's $67M fundraising milestone and share guidelines on starting a chip company in the 2020s.

The Holy Roman Empire was in no way holy, nor Roman, nor an empire – Voltaire.

When I moved to Silicon Valley nearly 22 years ago, my uncle joked with me that there was no silicon left in Silicon Valley. Sure, I was writing Verilog for a semiconductor company, but everything was being fabbed in Taiwan. I can’t remember the last time I went to a pitch meeting in what used to be called “The Golden Triangle” (area bounded by 880, 237 and 101). That was where all the companies used to be. In fact, while the Bay Area has continued to prosper (even during Covid) over the past 22 years, Silicon Valley has been replaced by San Francisco and the greater Bay Area.

I bring this up because “Silicon” Valley’s move out of Silicon Valley has also coincided with the fall of investments in semiconductors – Silicon Valley’s namesake. With semiconductors being prominent in the news of late (President Biden’s Executive Order, Taiwan and U.S. tensions with China, Influence of TSMC as the world's biggest chipmaker) I’ve been thinking a lot about semiconductors lately. And AI is EVERYWHERE lately – but all I hear about is software. If AI is going to be the next Big Thing (and at Amplify, we’ve been investing behind this thesis for nine years), then Silicon Valley will have to show up!

This talking of semiconductors got me thinking – there are few (if any) guides online about starting a chip company in the 2020s. I’ve lost count of the SaaS/PLG content from VCs and other entrepreneurs, but information on starting semiconductor companies is in vanishingly short supply. I believe Sima’s new round of financing – just under $70M – is a great opportunity to remedy that.

Krishna Rangasayee founded Sima.ai almost four years ago because he saw the gap in the market that was formed by semiconductor companies focused on AI in data centers and mobile phones but had left a cavernous gap in the middle. Sima.ai is an MLSoC company – that is to say, a System on a Chip focused on computer vision (AI!) applications at the embedded edge. We recently led Sima’s new round of financing to help them extend their lead in edge-based computer vision applications. We led the original round in early 2019 and were ecstatic to do so again nearly four years later.  In honor of Sima.ai’s new round, I’d like to present my Rules in the (New) Semiconductor Age – which Sima demonstrates perfectly.

Sigh. I know you’re a hardware engineer. And I know you want to innovate everywhere you can. But don’t. Figure out the IP on the chip that is truly mission critical, and buy (yes, buy!) all the other IP. Memory controllers, PCI Express Gen 4 or 5 interfaces, processors (hello – ARM/RISC 5), etc. Whatever you can buy from someone else that’s been validated by the process you’re using – buy it. Even if the upfront cost is higher, buy it. The opportunity cost is just too high. You’ll get one shot at making the chip work.  Let me say that again – you have ONE SHOT at making the chip work. If the chip doesn’t work, the company is dead. You need to focus all your (hardware) energy on making sure the block of IP that truly makes your solution unique is performant, and that it yields. You can’t afford design, layout, validation and test cycles on IP that is necessary, but doesn’t differentiate your product. You need to spend your time elsewhere. I’ve seen so many chips fail because they opted to build blocks they could have purchased.

While we’re talking about minimizing innovation in silicon, that also means don’t use an advanced process node. Forgot the astounding direct cost of a tapeout on the advanced/bleeding-edge process nodes. All the associated costs are incredibly high as well. Tooling and IP are more expensive, and the IP isn’t as thoroughly tested. Remember, you want to get a working chip out as quickly as possible that can yield. Yield issues are far more likely on advanced nodes (even if you don’t have bugs, which you’ll probably have), which drives up COGS which can price you out of the market. Do yourself a favor and use a more mature process for a Gen 1 chip. If Gen 1 is working, it’s relatively easy to do a die shrink for Gen 1.5/2 and get that to market quickly (and it can make sense if everything else is working), but don’t start there.

Sima.ai executed this strategy perfectly. They innovated on one thing in silicon – their Machine Learning Accelerator (MLA). That’s it. Their first product – 16 nm which is not aggressive. But it worked. Their first silicon (“A0” is what we call it in the industry) was in their first customer’s hands in  under six weeks after the silicon came back. That’s unheard of in this industry. Sima.ai will take their first silicon to production and make material revenue off of their first chip. If you’re starting a silicon company, this is a must.

If you’re looking at any kind of digital chip, the companies with the highest gross margin all have one thing in common – proprietary software. The FPGA  space was dominated by a duopoly of my former employers – Altera (now part of Intel) and Xilinx (now part of AMD). Both had GMs in the high 60s. Behemoth NVDA historically has had GMs in the mid 60s%. AMD, for all their success (and similar in many ways to NVDA at the chip level) sports a GM of less than 50%. Why does proprietary software matter so much? It creates massive software switching costs for the individual engineers who are responsible for getting these systems to be performant. Back when I was an FAE (semiconductor speak for an SE/SA) I would spend hours in the lab with my customers helping them to get their design to work via my company’s proprietary tooling. While there was a learning curve on the front end, once that customer was over the hump they never EVER wanted to change. NVDA did one better and created CUDA – the AI software platform. Do you ever wonder why NVDA dominates AI market share? Hint: their chips are good, but other companies (AMD) have great chips. It’s CUDA!

But if you’re starting a company, none of these are the reasons why proprietary software is so important. The first reason goes back to Rule 1 – by limiting hardware innovation, you HAVE to innovate more in software. You just don’t have a choice. But by innovating in software you make your product more accessible and easier to adopt. That’s (obviously) huge for a startup.

Sima.ai is all about their software. Whenever you talk to Sima.ai, you hear them talking about this:

The reason “any” matters so much here is because it’s important that any customer can use the product in a pushbutton fashion. Pushbutton. Too many semiconductor companies rely on an army of engineers hand-coding solutions on a per customer basis. That just doesn’t scale and is prohibitively expensive. Sima.ai’s ability to let their customers develop solutions themselves with minimal assistance from the company is a tremendous advantage for Sima.ai.  What really impressed me with Sima.ai was their simulated, pre-silicon pushbutton performance was within 7% of the measured performance when the chip came back across their top 30 models. That’s a tremendous achievement.

Go to market for semiconductors looks *nothing* like SaaS / PLG. Even more so than with software companies, everything in the way a semiconductor company goes to market must be reinforced by the organizational focus of the company at almost every level. There are basically three models: Mega Customer, All Channel and Hybrid. In the digital/ASIC world, most companies follow the Mega Customer strategy.

Mega Customer: Think about Broadcom selling a cable set top box (STB) chip back in the day. There were two primary suppliers of STBs in the US – Cisco (Scientific Atlanta) and Motorola. If they didn’t win those two designs they couldn’t justify the cost of building the chip. So the entire BU needed to almost operate as an extension of their main customers. If they lost one, the rest of the STB business in the world wouldn’t make up for the money they lost. This is an extreme example, but you can think about BUs at your favorite chip company today and it’s quite similar. Google, Amazon, Microsoft and Facebook are massive purchasers of CPUs. So Intel and AMD both spend a lot of time and money making sure those customers have exactly what they want. This isn’t the Henry Ford “they can have whatever they want as long as it’s black” situation. Building this kind of sales organization is incredibly straightforward. You only hire people who know your target account intimately and have decades of experience selling your kind of chip to them.

All Channel: Less common for digital chips (and more common with analog) this is the exact opposite of the Mega Customer Strategy. In this approach, you’re building a more generic lego block and letting anyone buy it. Often there are dozens (if not hundreds) of variants and your parts are sold through third party distributors. If this is the case, then the BUs must understand how to activate and support the channel and are much less focused on any one particular customer. It means the degree of self service for customers needs to be very high. And third party distributors need to be capable of supporting issues that arise in the field because you can’t support all of your customers directly (and you give up margin to your channel partners to support these customers for you). This is a very difficult place for a startup to begin their life.

Hybrid: This is where I grew up at Altera and Xilinx. The top ~dozen customers were ~50% of their revenue in a given year and the next 10,000 were the other ~50%.  That creates interesting dynamics in a company that you need to have both go to market skill sets that I outlined above. That’s both very difficult and very expensive to do. However, if executed correctly it’s very powerful. The drawback with Mega Customers is that you’re reliant on a small set of customers for everything. They can rake you over the coals on pricing and pit you against your fiercest rival. However, the engineering and support model for Mega Customer is very straightforward – do whatever is needed to get the business. That doesn’t work with All Channel – no customer is large enough to do anything custom for.

Hybrid is a great place for a startup to begin. It forces you to truly understand the market you’re attacking. Hybrid is also great because it forces you to invest in the software upfront, otherwise you have no hope of supporting the volume of customers Hybrid requires. One of the people who really taught me the Hybrid model is Sima.ai CEO, Krishna Rangasayee. Krishna ran Sales and Marketing at Xilinx before starting Sima.ai. He understands how to balance large vs small customers better than anyone I’ve met in semiconductor land.

So there you have it – my rules in the (new) semiconductor age. Starting a semiconductor company is challenging, but if we want to see real innovation in technology all the innovation can’t live in software. We’re going to need more Sima.ai’s to get started!